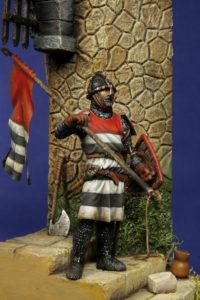 The company originated from 50 families who fled from Lombardy due to the Guelph and Ghibelline factions and the barbarism of Frederick I Barbarossa. The Bologna Council welcomed them in 1162 and gave them land in the city on which to build houses, and even donated land in the valleys of Altedo and Minerbio to cultivate. These families formed a military company that was self sponsored but served under the city of Bologna. Their banner had a particular standard, which was red with affixed an emblem of Justice nude with a sword in his hand. The Compagnia dei Lombardi arose in Bologna in 1170 on the principle of solidarity between Bologna and the citizens of Lombardy, as was also the case for the Tuscan families of Bologna, who met under the Two Towers and whose organization was known as the Compagnia dei Toschi.

In 1222, the company distinguished itself by waging war on behalf of Bologna against the city of Imola and was awarded as a trophy the keys to the city. The Compagnia dei Lombardi originally gathered near the Basilica of Santo Stefano but ceded the area to the monks on June 1, 1445, as is stated in the deed handed down by the late Lorenzo Jerome Cattanei, which reads:

"The society of Lombardi had it’s home here for 300 years or so when the abbot of Santo Stefano and St. Bartolomeo, Musiano, D. Giacomo Battagli, wished to fabricate a hospital dedicated to St. Bono (not Bovo), and so he asked the men of the society for their house and the land to build on, to which the Lombardi agreed. Therefore, on the date of June 1, 1445, the Massaro Monte di Zarlottino Mandici and others of the aforementioned company stipulated the sale of the stable to the abbot so that he might demolish it and build a hospital. Above the vaults of the hospital the abbot constructed a room that was 10 feet high, 20 feet long and almost as wide, with windows etc., as well as a stone ladder to access the aforementioned room outside the church of Santo Stefano in a convenient place and covered, for which the company promised to pay to the abbot 50  L. Bolognini". 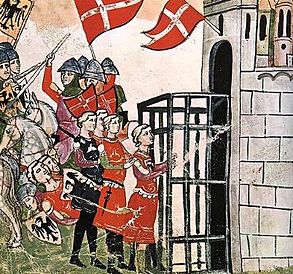 Despite the decline of the armed companies during the mid fourteenth century the Compagnia dei Lombardi became an increasingly important institution in Bologna and was able it’s maintain political prominence due to the many important families who became members. With the advent of the Bentivoglio family in the fifteenth century the Company underwent a its only attempt to transform its appearance by joining the brotherhood of S. Maria degli Angeli, who managed the  Ospedale S. Procolo o dei Bastardini. Later, with the decline of the Signoria, the Company reestablishing its headquarters in the Church of Santo Stefano in 1506, and in doing so regained its original nature as a secular organization without ties to the confraternity. In the sixteenth and seventeenth centuries the consolidated company acquired  an aristocratic personality that allowed it to escape the Napoleonic suppression of religious corporations in 1797, although its formation was never entirely aristocratic.

After eight centuries of history the Compagnia dei Lombardi continues to gather annually in its historic headquarters in Via Santa 1 in Bologna to nominate the Massaro and the Officers in the presence of the soldiers. This practice follows strictly the instructions of the Charter, and is a continuity of the tradition and solidarity on which the ancient and noble company formed its identity. 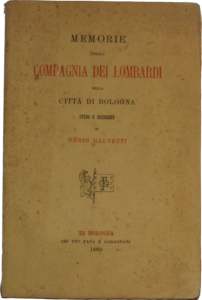 "Among the many companies of arts and arms, which already flourished in the city of Bologna, renowned for its many corporations, only one today remains: which, preserving its antique organization, is a vestige of the Institutes of the Middle Ages. Today, despite being an ancient weapons company, the organization lives in perfect peace, and it is indeed this peaceful disposition that is credited for its preservation. Yet there was a time when the name of this company, the Lombardi, resounded throughout the city, and its banner led the strongest warriors in battle: wherefore the bygone fame and the life present there allured and awakened memories.[…] the Compagnia dei Lombardi is nominated by Savioli as one of the oldest and most antique armed companies. This was during the time in which there arose in Lombardy a furious war between Frederick Barbarossa and the municipalities. Many great men were killed and castles destroyed,  as was the city.  Bologna, partaker in the Lombard League, received and brought back many poor allies who had fled their devastated lands, and made them into a society, giving them generous example of brotherhood with those that prevailed, always a dangerous thing, but even more so back then". 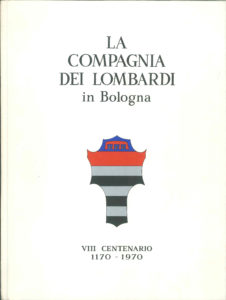 "In the guise of other companies, we find an assembly according to the congregation, at times militaristic or corporal; but without a book of statutes that governs our formation and resolutions. And we deem that all partners of an appropriate age will take part; indeed it is specifically ordered that at the time of the election of the Company every man will be invited by special messenger to speak to the congregation. Decisions will be made by a majority of votes, but in some cases, such as with sales or loans, the party will seek to obtain two-thirds approval not just from those present, but from the remainder of our associates. The votes must be cast with black and white beans, as was the custom in Bologna, because we already know the way in which the order of discussions can be set: the officers ask the opinion of such and such, and the shareholders have no right to speak, or rant, and as the statute recounts, more than once only four could partake in a discourse pertaining to the association at hand, and the others had to have a license to rise in front of the officers. Punished were the insulting slogans, the shouting, the squalls; prohibited were the members from sitting on the "bench" of the officers. The aforementioned assembly appointed the judges of the Company, which in turn made up the assembly. This method of mutual election is the distinctive quality of the Institutes of the Middle Ages, and was introduced due to a reciprocal surveillance among the electorate and the elected". 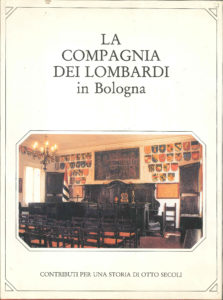 "The company has always held a certain fascination for its uninterrupted continuity of eight centuries as well as for its unique designation of “very ancient and Noble.” It was given the first name as it was one of the first arms companies in Bologna whose origins date back to the twelfth century, the second "noble" inasmuch as from the sixteenth century onwards all the families who comprised the company were among the most civilized and noble in the city. The reputation of the company was already established in previous centuries with its numerous military exploits: a testimony to the high esteem it received in 1271. In that time Bologna, after a long struggle, fought and defeated the Venetians  for the freedom of the seas at the mouth of the Po di Primano , which put the the Treasury funds in great difficulty. The enmity between Geremei and Lambertazzi then sharpened. To quell the factions, bring order and put an end to this chaotic situation, the "Judge of Peace" was established, Made up of three men of a “good and wise life” this formation became a military company called “Justice,” which was formed by brining together men of three existing weapons companies: the Lombardi, the Griffon and Branca".

excerpt from the book "La Compagnia dei Lombardi - Contributions to a history of eight centuries" A.A.V.V. (1992)