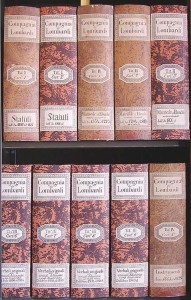 In the small and precious archive the Ancient and Noble Military Company of Lombardi in Bologna has kept the documents proving its history which dates back to the twelfth century. Enrico Frati, a doctor of law, who in 1875 was the first formal director of the Bologna State, was responsible for the organization of the archives in 1861. He prepared  the documents according to the following titles: Charters, Registers (Matricole), Meeting Minutes, Istrumenti, Accounting, Miscellaneous.

Here are some pictures of the original documents: